About us at Winston Churchill Venison 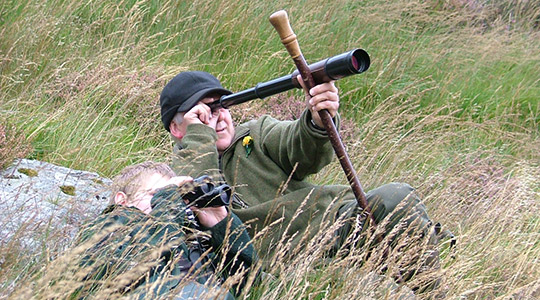 Winston Churchill comes from a line of the Churchill family that has a long history of many generations of gamekeepers.

Winston followed the tradition and left school during 1966 at the age of fifteen to follow his passion for the out door life working alongside nature as a trainee gamekeeper, working with his father. Although Winston was born and bred in East Anglia he had a burning desire to move north of the border and work even closer with nature amongst the Scottish hills with Britain's largest land mammal, the Red deer.

He moved north during April 1983 to work as a deerstalker on tracts of land on the Cowal peninsular, Argyll.

Winston met Anne, a local girl and they married during April 1985. During 1988 the Churchill's started their own deer stalking business called Winston Churchill Stalking, which still operates today and produces the carcasses for Winston Churchill Venison, Winston and Anne have two sons, Angus who was born during 1989 and now part of the team and Jamie who was born during 1992, who is also a keen and competent stalker.

Winston Churchill Stalking organises deer stalking holidays for sportsmen from all parts of the world to take part in a unique hunting experience in one of Europe's last wilderness. This side of the business now employs two full time deerstalkers - for more information check out our deer stalking page.

With demand growing for natural healthy meats - Venison is very low in cholesterol and fat - the Churchill's built a purpose built facility to process their deer carcasses during 2000. Sales took off and they now employ two full time butchers to process, package and despatch their venison, which has been sold mainly locally but now offers mail order and is going far and wide!

Sign up with your email below to receive our newsletters direct to your inbox.