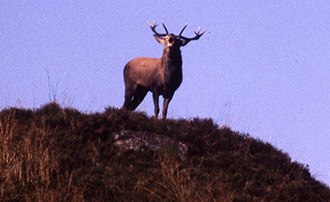 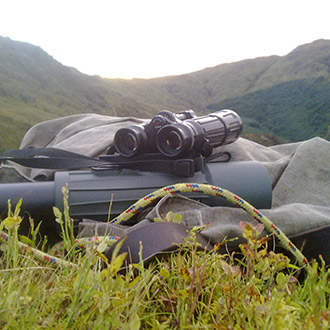 Winston Churchill Venison, Winston Churchill Stalking offers the chance to explore the wildlife in one of the most beautiful parts of the Scottish Highlands with the benefit of experienced local guides.

We can accommodate the sportsman who is interested in Red deer or Roe deer stalking or the naturalist with his or her camera for a general nature ramble throughout this wonderful landscape and habitat.

The Cowal peninsular is at the southern most part of the Scottish Highlands, the land is steep and rugged and ranges from sea level up to 3000ft +. Most of the slopes are afforested with commercial Spruce forests but some ancient broadleaf woodland remains intact and are now preserved and protected. All forests and woodlands are on the lower slopes going from sea level up to approx 1200 ft. The land above that is open hill.

Our forests and hill ground is the natural habitat for the only two species of deer that are native to Britain - the Red deer and the Roe deer. As a general rule the deer spend the daylight hours in the relative safety of the dense cover of the spruce forests and feed out onto the open hills during the hours of darkness. As a result of this behaviour we have to be active at sunrise and sunset and most of our stalking is on the upper edge of the forest where we intercept the deer, either coming out or going into the forest. Given the rugged, steep nature of the land, access is poor and the sport is very physically demanding but very rewarding - better suited to the young and fit!!

We have three full time stalkers (in season) Paul, Angus (our eldest son) and Alastair (who has transferred from the butchery), they are all extremely fit and competent (they have successfully completed Deer Management Qualification level 1 and level 2) as well as being very nice people. Paul who leads our stalking team has been with us for over twenty years and has gained an intimate knowledge of both the terrain and the animals, this knowledge is being passed on to Angus who has stalked with his dad since he was strong enough to climb the hills! Alastair is also an accomplished stalker and is a great support to the team during peak season! Winston is also available for "action" when necessary, he also has passed DMQ level 1 & 2 and has over thirty years experience on the ground. Anton (Our local Gamekeeper), who has also gained 20+ years of stalking experience in the local hills can be called upon when required, along with other enthusiastic and competent helpers gives us a lot of flexibility.

Since our forests have closed canopy and shaded out the under vegetation, our Roe Deer densities have fallen - they prefer the habitat that the young plantations offer. However, we still have a healthy Roe Deer population, if in lower densities. This allows us to offer a limited amount of Roebuck and Roe Doe stalking.

The Roe Buck season starts on the 1st April, through to the 20th Oct but there are two main periods that we stalk them. The first period is springtime, from the middle of April, through to the end of May - there is nothing like the freshness of an early spring morning and the excitement of spotting the first buck of the season!! The second period being the rut which takes place during late July and early August and given good weather, this is also a wonderful time in the year. It is time of year where it is possible to find bucks high up on the hill well away from the forest - this makes for exciting stalking. The Roe Buck stalking dictates a discipline of early mornings, getting at least some sleep during the daytime before setting off again for the evening stalk - this can be quite demanding on the body clock!!

The Roe Doe season runs from 21st Oct through until the 31st March and runs parallel with and beyond to the Red Deer hind season. This allows us to stalk on throughout February and March once the hinds have finished. Although the daylight hours are beginning to stretch, and stalking is starting early, with a break in the middle of the day and then back out until late, it can be a very productive time in the year, bringing several carcasses to the larder.

Although Red Deer stags come into season on 1st July, their antlers are not fully developed and velvet cleaned until around mid August / early September. By then they have also built up enough fat from summer feeding to see them through the rut which takes place from middle/late Sep until middle/late October. As a result we do not start trophy stag stalking until early September and carry through to the end of the season (20th Oct).

Most of our regular guests prefer to stalk with us during the rut but there are opportunities for some challenging stalking during early September - during this two/three week period the stags are lazy (fully fat and waiting for the rut) and quite difficult to find but very challenging and satisfying when success comes. The rut however is a very exciting time with a lot of Red Deer activity - to hear the stags roaring in the forests and on the hills is a very special experience.

Once the rut is over, we divert our stalking attention to the hinds. The stags at this time take a well earned break and feed heavily to build themselves for the coming winter. Following the winter and during March/April, they shed their antlers and the cycle starts all over again!!

We start hind/calf stalking at the beginning of the season, 21st Oct and carry through until the season closing date of 15th February.

We are very active over this period and need to shoot as many hinds & calves as possible to control the Red Deer population over the land that we stalk. It is very necessary to carry out this cull as Red Deer are a very successful species with no natural predators in the UK. The woodland behaviour of our Red Deer dictates that we have to stalk twice each day - daybreak and again at dusk.

This is a very challenging sport, often carried out in extreme weather but for the young and or fit this is also a very exciting and rewarding sport. The Red deer hind is a very wary animal and can be very difficult to approach especially in our terrain where they often have a commanding view of very large areas - this adds to the challenge!!

We have many regular guests who help us with the winter cull, some of whom visit us more than once throughout the winter. Compared to stag stalking, it is a relatively cheap sport.